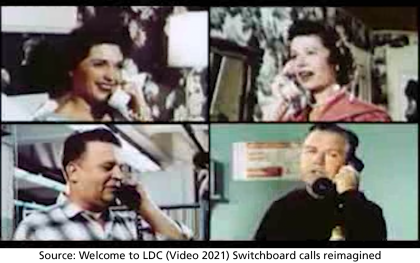 Switchboard-1 Release 2 (LDC97S62) is considered the first large collection of spontaneous conversational telephone speech (Graff & Bird, 2000). It consists of approximately 260 hours of recordings collected by Texas Instruments in 1990-1991 (Godfrey et al., 1992). The first release of the corpus (later superseded) was published by NIST and distributed by LDC in 1993.

Participants were 543 speakers (302 male, 241 female) from across the United States who accounted for around 2,400 two-sided telephone conversations. A robot operator handled the calls, giving the caller appropriate recorded prompts, selecting and dialing another person (the callee) to take part in a conversation, introducing a topic for discussion and recording the speech from the two subjects into separate channels until the conversation was finished. Roughly 70 topics were provided, of which about 50 were used frequently. Selection of topics and callees was constrained so that: (1) no two speakers would converse together more than once and (2) no one spoke more than once on a given topic.

This gold standard data set has been used for many HLT applications, including speaker identification, speaker authentication, and speech recognition. It is considered one of the most important benchmarks for recognition tasks involving large vocabulary conversational speech (Deshmukh et al., 1998) as well as a key resource for studying the phonetic properties of spontaneous speech (Greenberg et al., 1996). Annotation tasks based on Switchboard include discourse tags/speech acts, part-of-speech tagging and parsing, and sentiment analysis.

All Switchboard corpora are available in the Catalog for licensing by Consortium members and non-members. Visit Obtaining Data for more information.